Asterix in Britain by René Goscinny and Albert Uderzo - volume 8 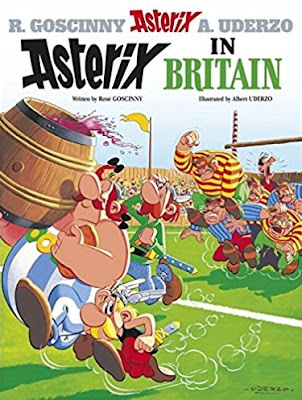 And so we come to Asterix and Obelix's visit to Britain. The British have many, many, many (x infinity) clichés and stereotypes of the French so it's always interesting to see how they view us. Thus we get a straightforward tale of Asterix and Obelix crossing the channel to help the former's first cousin once removed, Anticlimax, and his village which is holding out against the Roman occupation. All they have to do is get a barrel of magic potion to the village but the Romans are onto them...
Both history and geography are thrown to the wind in this story. In real life the Romans did not conquer Britain for nearly another century. And it's never clear just why our heroes need to travel through Londinium (London) at all when they are heading for a village in Cantium (Kent) and have travelled across the straits of Dubrae (Dover). But, as ever, the Asterix adventures are not aiming for realism (here's hoping that no school children have ever repeated any of the inaccuracies in classes) but instead taking the reader through a satirical take on culture both ancient and modern, here mocking the inhabitants of the old enemy. And it's perhaps inevitable that any story written in the 1960s about Britain would invariably include a take on London when in real life it was starting to swing, with even an ancient version of the Beatles making an appearance.

A good number of the stereotypes on display will be familiar to the British, derived from our own upper-class twit tropes. Thus many of the characters talk in a strange way, what old boy, maintain a stiff upper lip no matter what the situation and are obsessed with drinking hot water with milk. Funny customs are commented on throughout the story such as the use of the imperial system of measurements, the awkward structure of the currency (this story was first translated in the transition period for decimalisation when the new coins were circulating but the old system was still in place) or even just driving on the wrong side of the road. The British are shown sticking rigidly to their customs of a late afternoon break and taking two days off a week, being willing to put up with much inconvenience no matter how great they dislike it but willing to stand up to defend their way of life such as when a group of Roman soldiers are about to run across a freshly cut lawn.

Perhaps the biggest jokes are based around the food and drink. British food is presented as similar to Gaulish in content but prepared very differently, with a lot of boiled meat, to the point that Obelix would rather flee the country than enjoy a victory banquet. Mint sauce is also used a lot, and reviled by both Gauls and Romans (hilariously so when a prefect threatens to serve his generals to the lions with mint sauce, causing cries of pity... for the animals!). And then there's the beer which is always warm. This may all seem strange to us, especially now that boiling meat has largely fallen out of fashion and many pubs serve frozen beers (though cellar temperature ale - which is not as warm as legend has it - is much better), but then how often do the French really eat frogs' legs and snails or drink wine compared to our portrayals of them? None of the clichés and stereotypes on display are in any way nasty, just affectionate. The earliest English language editions of this volume came with a forward explaining that this was an affectionate parody and mirror, but it isn't necessary and has since been dropped.

A portion of the book is given over to events at a rugby match, which does actually get a decent amount of explanation. This surprised me at first given how big a rugby nation France is, but both Goscinny and Uderzo were from northern France where football is more popular, whilst most rugby activity is based in the south. As somebody who has never really understood rugby it's helpful that enough of the basics are explained so that the narrative isn't confusing, at least before Asterix, Obelix and Anticlimax race onto the pitch to recover the barrel of magic potion, pursued by a patrol of legionnaires in disguise. Overall this is one of the more straightforward plots in the Asterix adventures, being a mission to deliver a McGuffin with the complications of both the Romans and thief, but it works well as the pace and flow of the narrative serve to drive the story forward instead of meandering all over the place for the sake of it.

The British village itself brings a few more caricatures, with Chief Mykingdomforanos resembling Harold Wilson (the British Prime Minister of the day) and, in deference to more modern uses of the term "Britain" (in Roman times it was a province covering most of England and Wales), there are allied chieftains from Hibernia (Ireland) and Caledonia (Scotland) present as well. The story ends with a fictional explanation for another common British stereotype as Asterix combines some strange herbs with water to solve a problem.

This is one of the most fun of the Asterix stories so far. There's no animosity in the portrayal of the British at all, just an affectionate parody of stereotypes that show how our neighbours view us as a country of strange but determined people. It's easy to see why this one has not been shunned in this country but instead embraced as a wonderful insight.