Flight 714 to Sydney - The Adventures of Tintin 22 by Hergé 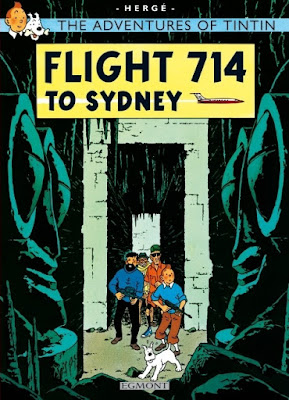 The full title of Flight 714 to Sydney is a recent change, bringing it closer to the original French Vol 714 pour Sydney. The English language translation was originally published as just Flight 714 back in 1968; the same thing happened with the Dutch (Vlucht 714) and a number of other translations seem to have taken their cue from one or other of these editions. But in the last decade the destination has been added, maybe to increase the album's appeal in Australia, maybe to create greater conformity, maybe for some other reason.

But however long the title is, it's a misnomer. For the whole adventure is an interruption from Flight 714, with the characters having temporarily disembarked in Djakarta (now Jakarta) for a refuelling stop, only to transfer to another flight. Only at the end of the story do they once more board a commercial flight, also numbered Flight 714 and we never actually see them arrive in Sydney. In between they wind up on a deserted island and make some highly unusual discoveries.

The Castafiore Emerald - The Adventures of Tintin 21 by Hergé 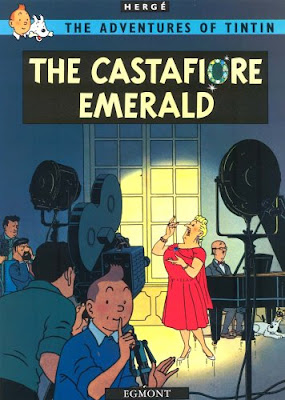 There's a notable cover variation with The Castafiore Emerald with the size of the spotlight on the cover varying, with a corresponding effect on how dark the remainder of the cover is. One effect on the current Egmont edition, with the smaller light, is that Tintin almost looks like he's been lifted from a cartoon cell. By the time this story appeared the series was now being adapted as a cartoon (known in English as Hergé's Adventures of Tintin). It's a reflection of the changing environment in which the Adventures now appeared. With this story they also began appearing much less frequently, with this album coming out three years after the preceding one, then it would be five years before the next, eight years until the one after that and presumably even longer had the final story been completed at the time. Tintin was more famous than ever before with an established volume of work and further appearances need not be so frequent. It was now possible to sit back, relax and bask in the fame, much like one of the characters in this tale.

Tintin in Tibet - The Adventures of Tintin 20 by Hergé 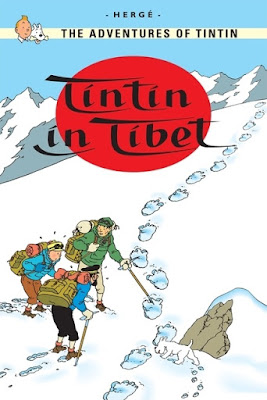 In some corners of the internet, which is an inevitable warning sign about the truth of this, there are claims that Tintin in Tibet was intended to be the final of The Adventures of Tintin and that everything which came afterwards was by publisher and popular demand. It's not clear how true this is, and it may be a misunderstanding of Hergé's considerations and circumstances at the time when it was conceived, but it's interesting to consider how this album might have stood as a conclusion to the series.

The Red Sea Sharks - The Adventures of Tintin 19 by Hergé 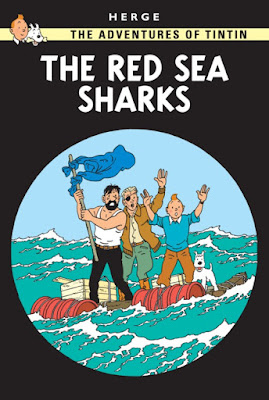 The Red Sea Sharks is a rare example of one of the later Adventures which had subsequent modifications to solve problems that brought up with it. However, the current Egmont edition appears to be a translation of the original album and thus the problematic dialogue, mostly relating to characters' understanding of the language in one way or another, is present here. One notable change from the original French is the title - originally this was called Coke en stock, meaning "Coke in stock" or "Coke on board", but it was felt that in English this evoked the soft drink far more than the fuel (and it would have also dated badly as coke is now little used domestically).