Asterix the Gaul by René Goscinny and Albert Uderzo - volume 1 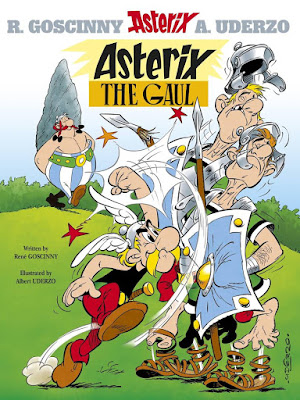 One of the best known of all the French bandes dessinées is the Asterix series which first began in 1959 and is still going to this day. In recent years the series appears to have had a small makeover with updated translations, new & more consistent colouring, modified covers and the original publication order being used for listings & numberings, with the result that the albums currently on sale (which will be looked at in this and subsequent posts) differ somewhat from the editions I remember from childhood. However, Asterix the Gaul was the introductory album even then and shows a strip that was in development even when it began to be serialised. Significantly there doesn't appear to have been any major latter day rewriting or redrawing of the album in order to make it more closely match the rest of the series. 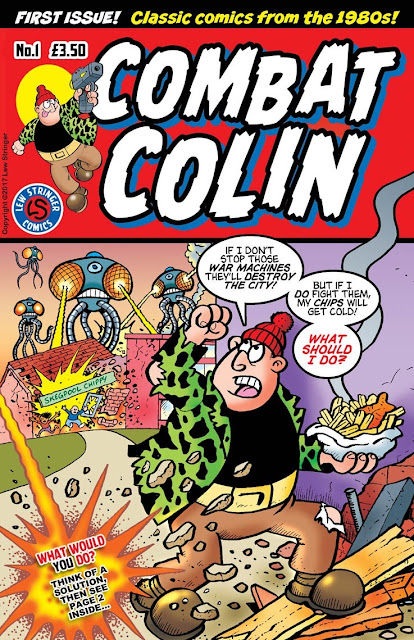 Lew Stringer has created many strips over the years for a huge variety of titles and publishers, but he's probably best known for his work for Marvel UK for various titles in the 1980s and early 1990s. Week in, week out he would produce a wonderful comedy strip appropriate to the themes of the comic in question. Many such as Robo-Capers, Captain Wally, Snail-Man or Macho Man are fondly remembered by readers to this day, but above all the top stand-out strip is Combat Colin. Created for Action Force weekly, the strip could have ended when that title died after just fifty issues but it instead made a transfer to Transformers (into which Action Force weekly was nominally merged) and lasted until the end of that title, even when the Action Force/G.I. Joe strip wasn't running in it. Recently Lew Stringer has produced the first of a series of collected editions of the strip, with issue #1 reproducing all of the strips from the Action Force days and today I'll be looking at that.

Tintin and Alph-Art - The Adventures of Tintin 24 by Hergé 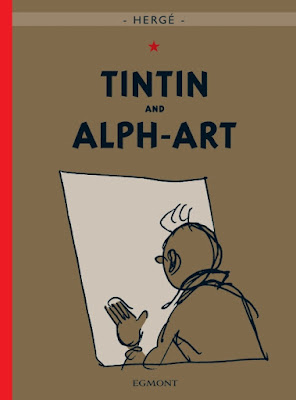 Whenever a popular creator dies there's inevitable speculation about works that might have been, either stories that were planned but never made or unpublished material sitting in an archive somewhere. Perhaps the most frustrating is when there's an incomplete tale that has a start and a middle but no clear indication of how it was meant to end.

Hergé had stated that he wished The Adventures of Tintin to die with him and it's a request that his heirs have upheld, to the point that Tintin and Alph-Art was never officially completed by the Studios Hergé (although they did carry on with a few more volumes of Quick & Flupke before closing). Although there have been some fan produced completions, the official version remains the unfinished sketches which have been released in a couple of formats with the current version being a 62-page album that appears to only be available in hardback from Egmont. (The American publishers, Little Brown, have, however, published it in paperback.) The bulk of the album is taken up with forty plus pages of thumbnail sketches on which Hergé had drafted the first two-thirds of the story, with the text and some directions transcribed, plus some additional pages of notes at the end that show some of his ideas during the development of the story, some of which were abandoned on the way and others may also have fallen aside.

Read more »
Posted by Tim Roll-Pickering at 13:30 No comments:

Tintin and the Picaros - The Adventures of Tintin 23 by Hergé 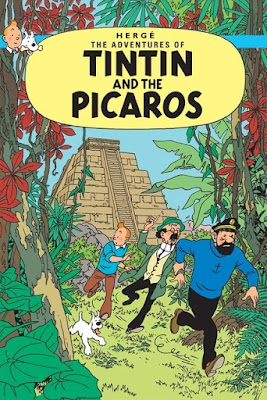 As the final complete album in the Adventures, Tintin and the Picaros inevitably has a lot riding on it, more so when one considers that this was the only completed story produced by Hergé in the last fifteen years of this life. There are some signs that the series is aware that things are winding down and thus it tries to tidy up some matters. But at the same time this story also sees some changes to the regular characters, as though the intention was to take them into the last quarter of the twentieth century in a far more modernised pattern.

Read more »
Posted by Tim Roll-Pickering at 13:27 No comments:

Tintin and the Lake of Sharks 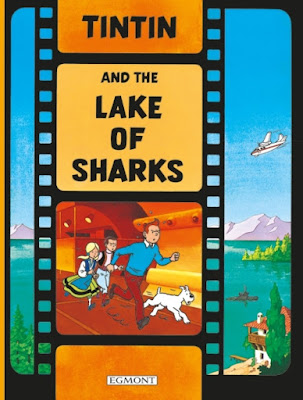 It's actually slightly surprising to see this album is kept in print. In many other comic traditions movies come and go, with a flurry of adaptations made at the time of the initial release but they usually then drop off the radar, going out of print and never being included in subsequent collections without much comment. But some of the Franco-Belgian comics instead keep the adaptations around, regardless of their status in canon. (Another example is the book The Twelve Tasks of Asterix, which is the illustrated text adaptation of the film of the same name, though the comic adaptation, with the English-language title "Asterix Conquers Rome", is long out of print.) Another curiosity is the title of this album - "Tintin and the Lake of Sharks" is almost a literal translation of the French "Le Lac aux Requins" but the English-language Region 2 DVD calls this "(The) Mystery of Shark Lake", with the "The" appearing or not in different places. (Even more strangely the French title is used on the sleeve cover.) It's not clear how this difference arose but one effect is to isolate the album from the source material to the point that it can appear to almost be a twenty-fifth adventure. The back-cover gallery on all of The Adventures of Tintin relegates this to the list of "Other Tintin Adventures to collect" (yes, plural, even when this sometimes the only one listed) but it can be found along with the other albums in bookshop displays to be obtained with all the rest, in spite of its status in the canon.